German settlers first arrived in the Perkasie area in the 1730’s and 40’s. A group of Lutheran and Reformed people began home worship. Henry Muhlenberg noted this congregation when he surveyed the Philadelphia area congregations in 1742. In 1743 the group purchased a strip of land and built a log schoolhouse/church, calling it St. Peter’s. Muhlenberg did not approve of a number of the clergy chosen by the Lutherans. The group sharing the building became two congregations, one Lutheran, the other Reformed. These two congregations jointly built a stone church which was dedicated in 1766. It was called “Friedens Kirche,” or Church of Peace. In 1773 the Lutheran congregation joined the Old Goshenhoppen parish, a collection of Lutheran churches which shared approved Lutheran ministers. A second stone church was erected in 1838. Services were held on alternate weeks for each denomination. The two congregations shared this building for the next 119 years.

In a church with a 275 year history, events from long ago do not really represent our congregation today. However, it is informative to see history reflected in the turning points the church faced. Personal safety during the colonial period was a real issue, and a pastor resigned in 1754 due to the danger from hostile Indians. During the Civil War a pastor departed from the Ministerium to which our church belonged due to “political affairs.” All church services were held in German until 1892, when the first English service was celebrated. English services became more frequent after 1918. In 1943, during the Second World War, the current pastor left to become a military chaplain.

By the 1920’s, with the pastor serving four parishes, there was a demand for more frequent Lutheran services. Peace was geographically far from the other members of Old Goshenhoppen, so it left this parish in 1923. In 1928, Peace joined St. Matthew’s Keller’s Church and St. Paul’s Applebachsville to create the Keller’s-Tohickon Parish.

By 1956 it was very evident that the 1838 church building needed to be renovated and expanded. The post-war period had led to a time of increased attendance, and in 1956 the two Lutheran churches, Peace and St. Matthew’s , shared one pastor who served 900 people The Union congregation was now at a crossroads. In 1957 both Lutheran and Reformed congregations voted on their future. The decision was made that the congregations would separate. In an agreement signed on October 1, 1957, St. Peter’s bought Peace Congregation’s share of the Tohickon Church building. In 1958 St. Matthew’s and Peace dissolved their joint parish. Their joint pastor, Rev. Merwyn Shelly, chose to join Peace Church on a full-time basis. 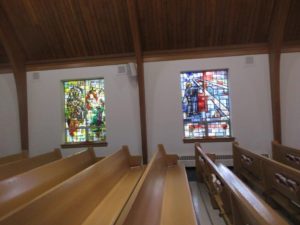 The newly independent Peace-Tohickon congregation purchased a building site on March 20, 1958. Ground was broken on Sunday July 20, 1958. Construction began on April 1, 1959, and a cornerstone was laid on Sunday, July 19, 1959. The people of Peace came together to build this church, each helping as he or she could. A service of dedication on Sunday, July 24, 1960 saw the opening of the new church.

In the years that followed, the church served its members and the community with regular services, educational programs, outreach, and various ministry groups. Worship has been enhanced since the 1990’s by a contemporary service, and our music program has diversified. We were served by Rev. Shelly, who retired in 1972, Rev. Arthur M. Frieberg, 1972-1982, Rev. David Schaeffer, 1982-1990, Rev. W. Dean Bickel, 1990-2008, and Rev. Serena Sellers, 2009-2016.